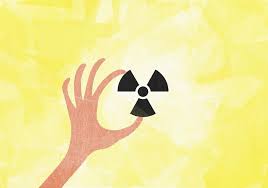 Radioactive Consumer Products Around Us

Most people are unaware of the fact that there are several radioactive consumer products in existence.  Radioactive materials ability to radiate its rays flawlessly over many years without an external power source has attracted manufactures to utilize them.  Other times they are utilized for their illumination properties.  In many cases the materials best suited to their purpose just so happened to also be naturally radioactive.

Naturally radioactive materials have very low activity levels and present no threat to us or society.  They represent the most common type of radioactive consumer products still in existence.  Most others have fallen out of favor and have been replaced with substitute materials and means. While naturally radioactive materials pose no threat, they can present problems when grouped together in larger volumes reaching the size of a shipping container or a semi-truck.  The collective volume produces enough activity to trigger alarms whenever they are scanned by radiation detectors at shipping yards or border crossings.

Here’s a list of the more common radioactive consumer products from the present, recent past, and even cray stuff from the long past. 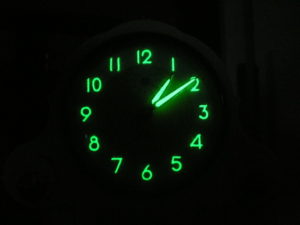 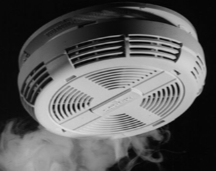 This application probably wins the prize for the least expected radioactive consumer product.  Most smoke detectors used in our homes utilize americium-241, a radioactive element.

The radioactive material is positioned between two electrically charged plates, which ionizes the air and causes current to flow between the plates. When smoke enters the chamber, it disrupts the flow of ions, thus reducing the flow of current and activating the alarm.

Unless tampered with, smoke detectors pose little to no health risk; a smoke detector’s ability to save lives far outweighs the health risks from the radioactive materials.  Visit RadTown to learn more. 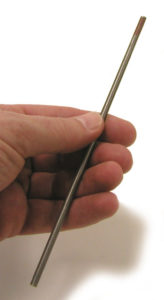 Thoriated welding rods are really electrodes used in tungsten inert gas (TIG) welding.  This type of welding is typically used where high-quality welding is required like in the aircraft and petrochemical industries.  Thorium is added to the tungsten because it increases the current carrying capacity of the electrode and it reduces contamination of the weld. In addition, it is easier to start the arc and the latter is more stable.

By weight, the rods are usually 1 or 2% thorium oxide although higher concentrations up to 4% have been used.  The rods are color coded to indicate the thoria content: yellow indicates 1 %, and red indicates 2 %. The color usually appears as a band at one end of the rod. While they range from 0.25 to 6.35 mm in diameter and 7.6 to 61 cm long, a “typical” rod would be about 2.4 mm in diameter, 15 cm long, and contain 0.23 grams of thorium. Estimates over the last two decades put the annual production at 1 to 5 million electrodes. 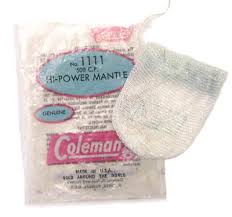 Older, and some imported, gas lantern mantles generate light by heating thorium (primarily thorium-232). Unless gas lantern mantels are used as the primary light source, radiation exposure from thorium lantern mantles is not considered to have significant health impacts.  Because they were so readily available in the past, they were also frequently used to verify or demonstrate radiation meters! 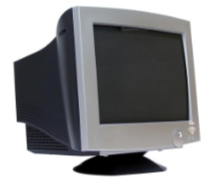 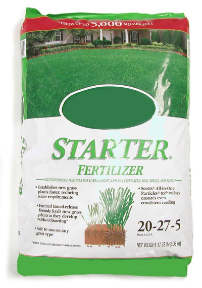 Commercial fertilizers are designed to provide varying levels of potassium, phosphorous, and nitrogen to support plant growth. Such fertilizers can be measurably radioactive for two reasons: potassium is naturally radioactive, and the phosphorous can be derived from phosphate ore that contains elevated levels of uranium. 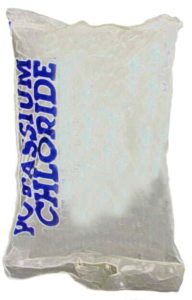 All potassium contains potassium-40, a naturally occurring beta gamma emitter, and in large enough quantities it is easily detected with a simple survey meter. This bag, for example, could not get through a monitor at a nuclear power plant without setting off an alarm.

Ceramic materials such as tiles and pottery may contain elevated levels of naturally-occurring uranium, thorium, and/or potassium. In many cases, the activity is concentrated in the glaze. Unless there is a large quantity of the material, the amount of radioactivity in these products is unlikely to be greater than natural background levels. However, some older dishware (e.g., pre-1972 Fiesta®ware) can have radioactivity exceeding background levels; to minimize health risks, you may not want to use these pieces for eating or drinking. 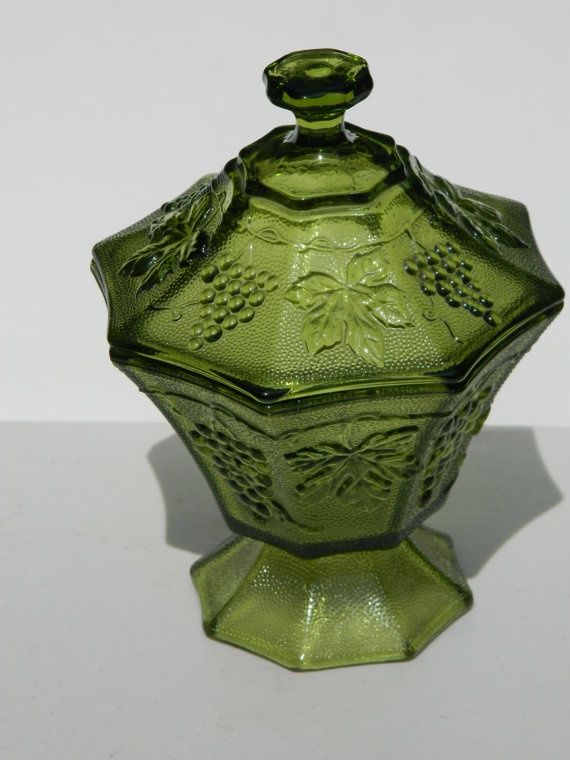 Glassware, especially antique glassware with a yellow or greenish color, can contain easily detectable quantities of uranium. Such uranium-containing glass is often referred to as canary or vaseline glass. In part, collectors like uranium glass for the attractive glow that is produced when the glass is exposed to a black light. Even ordinary glass can contain high-enough levels of potassium-40 or thorium-232 to be detectable with a survey instrument. However, the radiation received when using glassware – even canary or vaseline glass – is unlikely to exceed background radiation levels. 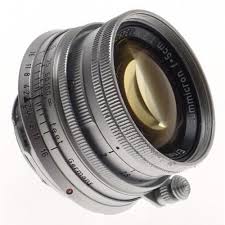 Older camera lenses from the 1950s-1970s incorporated thorium into the glass, allowing for a high refractive index while maintaining a low dispersion. The health risk from using older camera lenses is low; the radiation received when using a thoriated lens camera is approximately equal to natural background. 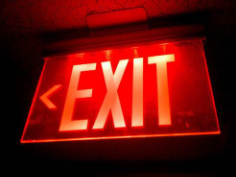 Some EXIT signs contain the radioactive gas called tritium, allowing them to glow in the dark without electricity or batteries. The tritium used in EXIT signs gives off low-level beta radiation, causing a light-emitting compound to glow. Tritium EXIT signs do not pose a direct health hazard, as the beta radiation can be stopped by a sheet of paper or clothing. Tritium EXIT signs must not be disposed of in normal trash.  Learn more about tritium exit signs. 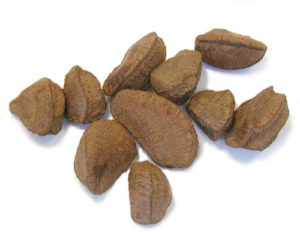 It has been known since the 1930s that Brazil nuts contain relatively large concentrations of barium (approximately 0.1 – 0.3% by weight).  That Brazil nuts also contain high levels of radium was first reported in the 1950s.

Brazil nuts are the seeds of Bertholletia excelsa, a large tree that is grown in various parts of world, not just Brazil.  The nuts, in groups of 12 to 25 much like the sections of an orange, form the globular (4-6” diameter) fruit of the tree.  It is not true, as is sometimes thought, that the high concentration of radium in Brazil nuts is due to elevated levels of the uranium and/or thorium series in the soil in which the tree grows. The accumulation of the radium (and barium) is due to the very extensive root system of the tree. For what its worth, measurements by Penna-Franca et al indicated that higher radium concentrations are found in the leaves and cork of the tree than in the nut. 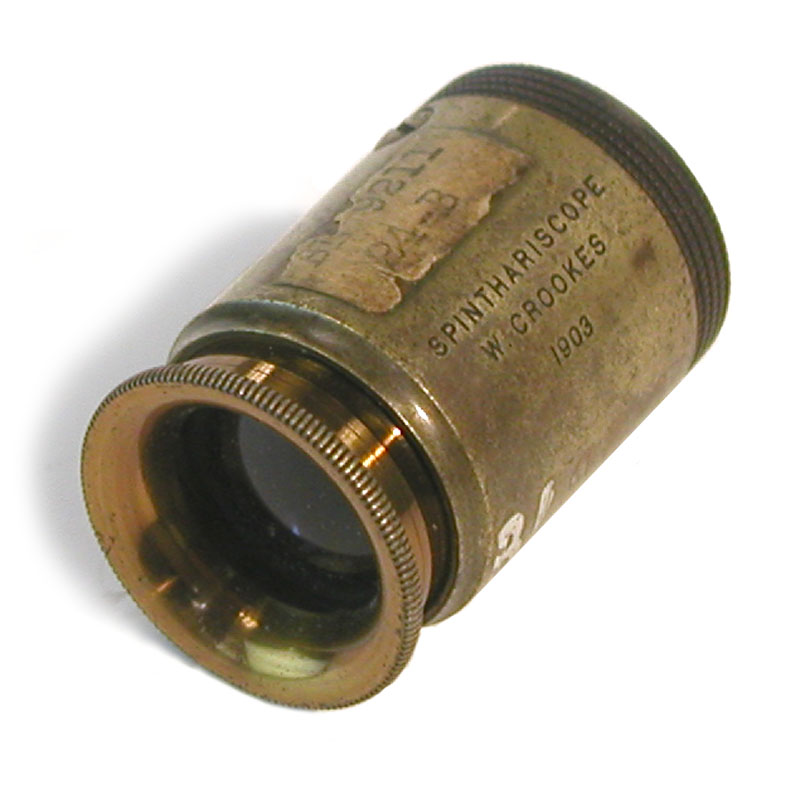 The spinthariscope was invented in 1903 by William Crookes. These two photos show an example of the first commercially-available version of the spinthariscope. This particular spinthariscope came from Robert Millikan’s Laboratory at Cal Tech and dates from the 1920s or earlier.

After dark-adapting the eyes, the viewer looks through the lens of the spinthariscope and observes a screen of zinc sulfide where tiny flashes of light appear, an image Crookes described as a “turbulent luminous sea.” Each flash of light is produced by an alpha particle emitted from a tiny sample of radium on the tip of a pointer positioned just above the screen. The spinthariscope can be considered the first radiation counter, i.e., it is capable of recording individual events.

Shortly after Wilhelm Roentgen discovered X-rays and Marie Curie’s discovery of radium, the world immediately recognized the powerful value in the field of medicine.  Not to be left behind, enterprising individuals introduced their own elixirs to remedy ailments of almost any kind.  It did not take too long, in most cases, to realize they did more harm than good.    With our current knowledge of radioactivity and the risks to health, we view these early adoptions with shock and horror; but back then, they simply had no idea.

Below are some of the more interesting innovations of the time. 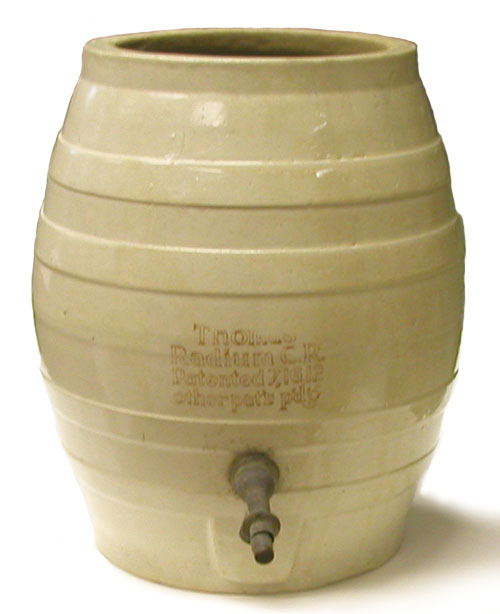 “Pottery is now manufactured which has in it a small percentage of radioactive material. This is mixed with the clay and baked in the kiln. Water left in the pottery of this nature for a short time will become radioactive by induction, and a health-giving drink is made. Such water may also be employed in the watering of plants with good results, since the presence of a radioactive compound near the roots of a plant is very helpful to its growth.”

Thomas placed the following advertisement in the November 5, 1921 issue of the El Paso Herald:

RADIUM ORE. that will keep you supplied with soft Radio Active Water for generations is the greatest remedy and cure ever discovered for each and every disease. 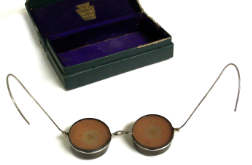 Quoting the manufacturer’s literature: “the Radio-Active lenses will be found helpful in imperfect refraction, MYOPIA or Nearsight, HYPERMETROPIA or Farsight, PRESBYOPIA or Oldsight, HETROPHOBIA or difficulty in focussing.”

“Headaches, caused by eyestrain and other eye disorders, can be quickly relieved by the use of the lenses.”

“The best results are obtained by wearing the lenses for a period of from five to ten minutes twice a day, keeping the eyes closed during treatment.” 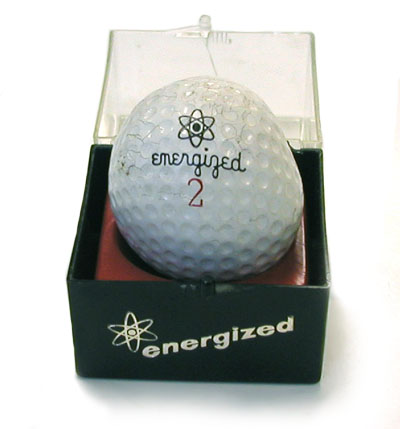 The ENERGIZED Golf Ball, highest quality ball made in the USA, is treated with gamma rays from radioactive Cobalt 60 in our laboratories in Oak Ridge to give it greater distance and a tougher cover.  It has a steel center and carries an exclusive guarantee that compression will be a constant 95+.  Also the ENERGIZED Golf Ball conforms to USGA Rules.  Exclusively unique, this new golf ball creates interest, excitement, fun. 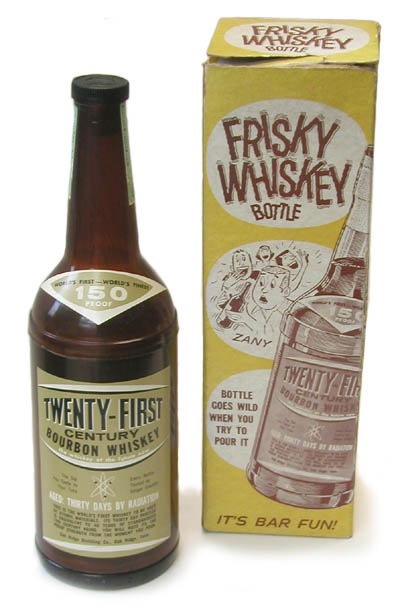 This one is not exactly a radiation consumer product, but fun and interesting at the same.  According to the label on the front of the bottle, it was produced by the fictitious Oak Ridge Distilling Company, aged by radiation and tested with a Geiger Counter. In reality, it is an empty plastic container with a battery powered motor inside that causes the bottle to shake violently when it is picked up. That’s what the label is referring to when it states “you will note its 150 proof strength from the moment you pour.” Since it comes empty, it is up to you to fill it with your favorite beverage.

The earliest reference for the “Frisky Whiskey” is a brief mention in the December 13, 1965 issue of the Odessa American. It was said to add laughs galore to a Christmas party – exploding cigars were also recommended. The following year, it was advertised as a great Father’s Day present (Cincinnati Enquirer, June 12, 1966):

“Frisky Whiskey bottle looks so innocent . . .watch the unsuspecting dad pick it up . . as he starts to pour, the bottle starts vibrating to shake his hand uncontrollably.” 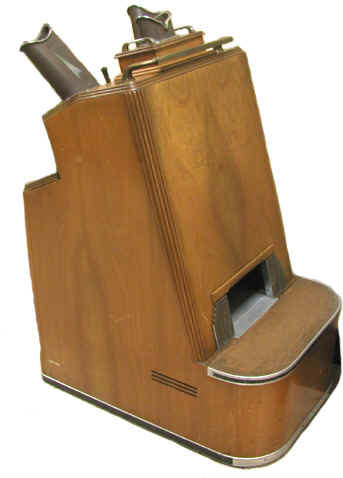 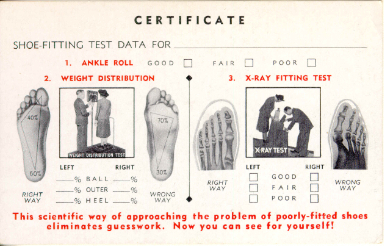 One of the most unexpected radioactive consumer products is the shoe fitting fluoroscope.  This was a common fixture in shoe stores during the 1930s, 1940s and 1950s. A typical unit, like the Adrian machine shown here, consisted of a vertical wooden cabinet with an opening near the bottom into which the feet were placed. When you looked through one of the three viewing ports on the top of the cabinet (e.g., one for the child being fitted, one for the child’s parent, and the third for the shoe salesman or saleswoman), you would see a fluorescent image of the bones of the feet and the outline of the shoes.

According to Duffin and Hayter, Dr. Jacob Lowe created his first fluoroscopic device for x-raying feet during World War I. By eliminating the need for his patients to remove their boots, the device sped up the processing of the large number of injured military personnel who were seeking his help. After the war, he modified the device for shoe-fitting and showed it for the first time at a shoe retailer’s convention in Boston in 1920.

If you wish to dispose of any of the radioactive items presented here or from industrial products, call Radiation Solutions at 208-206-3203.